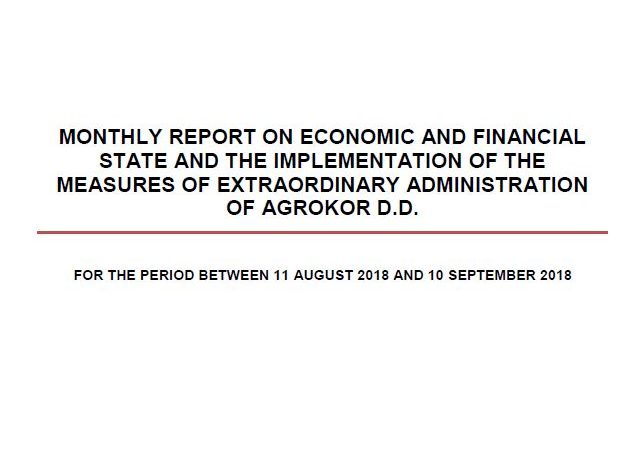 Operating profits of the Agrokor Group for I-VII/18 exceed budget by HRK 20.7m, the driver of the increase being Konzum with EBITDA in August of more than HRK 330m

Agrokor’s Extraordinary Administration published its monthly report for the period from 11 August to 10 September, 2018. The goal of the report is to monitor the development of the economic and financial situation within the Agrokor Group over the period and outline the realization of the Extraordinary Administration’s operating activities and the overall business operations of Agrokor d.d. and some of its major subsidiaries.

The driver of the good retail results is Konzum, having generated more than five billion kunas of revenue in seven months and exceeded budget by 0.4%. Revenue in July outperformed the budget by two per cent. The positive trend continued in August, when Konzum increased its turnover by three per cent compared to last year’s August, online sales improved by more than 20 per cent while due to the restored customer and supplier confidence the basket grew by four per cent and employee productivity by over 10 per cent. At the end of August Konzum realized operating profits of around HRK 330m and thus achieved an EBITDA margin in line with global standards, of more than 5 per cent.

Unfavorable weather conditions affected the result of the Food sector, with the total cumulative revenue of this sector lower by slightly less than HRK 200m at HRK 4.733bn. The lower revenue realization was mostly affected by the Drinks and Frozen Food segments, where seasonality is high and the impact of weather conditions significant. However, the cumulative operating profit of the sector exceeded budget by over HRK 40m and amounted to HRK 792.5m for the period from January to July.

The Agriculture sector saw a drop in revenues against budget in July, due to the continuing trend of declining pork prices on the European commodity exchange and the continued drop in prices of semi-hard cheese. Intensified other activities successfully set off the impact of the price drop on cumulative operating revenues which amounted to HRK 1.193m, but the decline in operating profits against budget is still present. Given the good natural indicators in primary production for the forthcoming period the impact of the price drop on European commodity exchanges is expected to be reduced.

On 4 September, 2018 Agrokor submitted its response to the appeals lodged against the Ruling confirming the Settlement Plan dated 6 July, 2018 to the Zagreb Commercial Court. In keeping with the efficiency principle and striving to avoid unnecessary repetition, Agrokor decided to respond to all 92 appeals by way of one submission, published at the Court’s bulletin board: e-oglasna.pravosudje.hr/. In its submission Agrokor holds that the first instance Court accurately and completely established all facts relevant to the decision making and duly applied the substantive law to the matters of fact thus established, that the ruling was valid and explained in full and that no procedural error had preceded its passing. In pursuance thereof, Agrokor holds the first instance ruling to be correct and legitimate.

The two stages of the implementation project include the process of planning and the process of putting the plan into effect. In the first stage the plan is initially prepared for two pilot companies (Ledo and Konzum) and will then be implemented for the other insolvent companies under extraordinary administration.