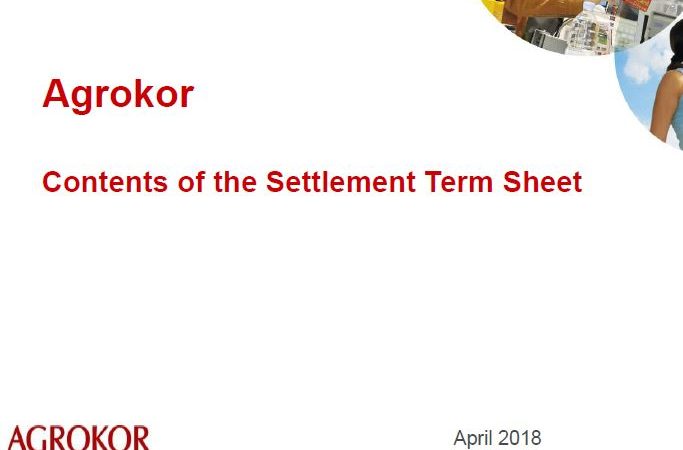 Settlement Term sheet signed by creditors within the statutory deadline

Contents of the Settlement Term Sheet

Precisely one year after the Extraordinary Administration proceeding was initiated in Agrokor, all Members of the Interim Creditors’ Council, representatives of the Suppliers’ Association and the representative of VTB have signed the settlement term sheet on 10 April 2018. This term sheet represents a framework upon which the actual text of the settlement will be drafted based on filed claims and their legal status.

Business operations of the future Group is based on the arm’s length principle regarding intercompany relationships within the Group, meaning that the parties are equal and independent in their relationships. It has particularly been established that the main criteria for determining individual claim recoveries is the EPM methodology which has been used in the largest international corporate restructurings.

“We consider it a great success that the creditors have, not even six full weeks since my colleague Irena Weber and I have been appointed as the Extraordinary Administration, through very demanding and constructive negotiations, successfully completed this, last stage prior the final agreement. We therefore express our thanks to the representatives of suppliers and financial institutions, but also to the Prime Minister, Mr. Andrej Plenković and Mrs. Martina Dalić, the Deputy Prime Minister, for the support they have given the Extraordinary Administration proceeding and all creditors in reaching the agreement.”, said Fabris Peruško, Agrokor’s Extraordinary Commissioner.

“We are truly proud that we have, in one year, reached the final stage of this very demanding and difficult process in which almost 6.000 creditors is participating with more than HRK 57 billion of filed claims. Simultaneously, the Agrokor system has been stabilized, all operational companies are performing well and their operative profit is increasing, while paychecks to all employees as well as all current expenses are being timely paid.”, said Irena Weber, Deputy Extraordinary Commissioner of Agrokor.

Agrokor surprised by the conduct of Slovenia’s Public Competition Agency (Javna agencija za varstvo konkurence)
Agrokor expects public authorities to provide complete information to the public, including facts and arguments presented by Agrokor in pending legal proceedings With regards to yesterday’s release published by the Public Competition Agency of the Republic of Slovenia under the title „Additional explanations related to the concentration of Agrokor AG and Ardeya Global Ltd.“, Agrokor…
We use cookies on our website to give you the most relevant experience by remembering your preferences and repeat visits. By clicking “Accept”, you consent to the use of ALL the cookies.
Do not sell my personal information.
Cookie settingsACCEPT
Manage consent